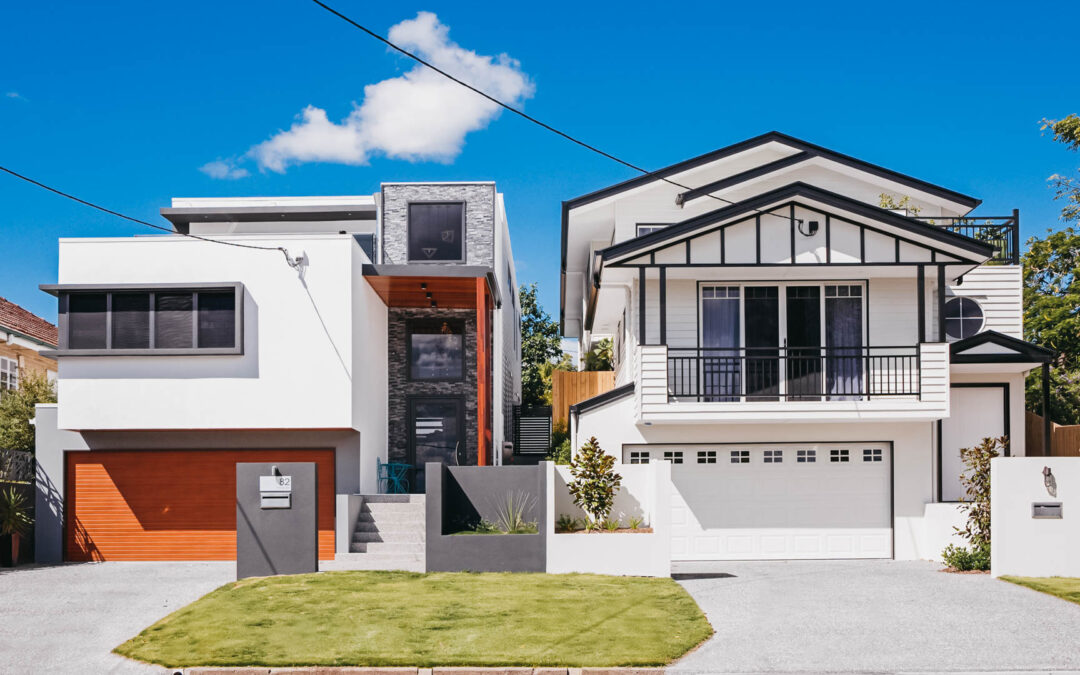 Brisbane is a beautiful microcosm of architectural stages in Australian Homes.

With the first residences constructed in the mid 1820’s, the oldest standing home in Brisbane is the Georgian-esque Newstead House, built in 1846. One can see the evolution of styles and building methods billowing outwards from the inner suburbs like Paddington, New Farm and Teneriffe, all the way to the outer areas like Ipswich, Loganholme and Strathpine.

During the late colonial period of Brisbane, residences closely resembled the architecture of English Cottages, with additional focus on outdoor areas to compensate for the soaring temperatures in the summertime. Many of the homes of this time are now historically protected, such as The Bulimba House (1850), The Deanery (1855), and The Bardon House (1863). You can typically find these styles in the older suburbs like Red Hill and Highgate Hill.

Around this time, Brisbane was still slowly growing in population. Designs and building methods were altering in order to better handle the humid climate of the Northern East Coast. These homes featured more masonry work and decorative timber accents. These are still prevalent in suburbs such as Clayfield, Ascot, Hawthorne and Graceville.

The interwar building boom gave rise to “Timber and Tin” housing – popular in suburbs such as Ashgrove. Another facet to this boom is the beginning of derivative American and European architectural styles, such as the Californian Bungalow, Spanish Mission, Functionalist and Art Deco. These styles make a drive through suburbs such as Coorparoo, Chelmer and New Farm, a real treat for the architecturally inclined.

With the combination of a marked increase in immigration, the post-war Baby Boom and severe housing shortage, mass produced homes became the norm. These homes typically featured fibro sheeting and tin roofing. This was also the beginning of offshore home production, by companies like Coopers Plains (The Netherlands) and Zillmere (France).

The architectural and construction directions of the past in Brisbane have led to the arrival of a style unique to the state – The Queenslander. A blend of American and English styling, with sensitivities for the unique climate of the area has informed this nationally recognised style.

The broad characteristics include but are not limited to: high set, single story, timber cladding and corrugated tin roofing. Most notable detail would be the typically larger veranda area, often wrapping around the house, never fully encloses it. Sporting exterior staircases, multi-gabled roofs and timber ‘stumping’. Raising these homes off the ground has been one of the more obvious structural responses to the climate, allowing underfloor ventilation to cool the dwelling in the summer months.

Homes built today in Brisbane are truly spoilt for choice, with a melting pot of styles to be inspired by, in hand with the leaps and bounds the industry has made in knowledge and development, Brisbanites have the best of both worlds at their disposal. Many modern homes of the area are implementing smart technology for the benefit of the resident’s lifestyle and the care of the environment. More importantly, remaining flexible for the future needs of its inhabitants.

O’Shea and Son’s proudly creates dwellings that honour this great history as well as leading the industry in adopting innovative methods of construction, better materials and progressive adaptability to client and environment. With our two, fully customisable directions; the more traditionalist Hamptons style and the innovative Modern Contemporary, we’re sure to find your perfect home.

So, if you are looking to build in Brisbane, let O’Shea and Son’s help make your dream home, a reality.